← more from
Sub Pop
Get fresh music recommendations delivered to your inbox every Friday.
We've updated our Terms of Use. You can review the changes here.

Age of the Goonda 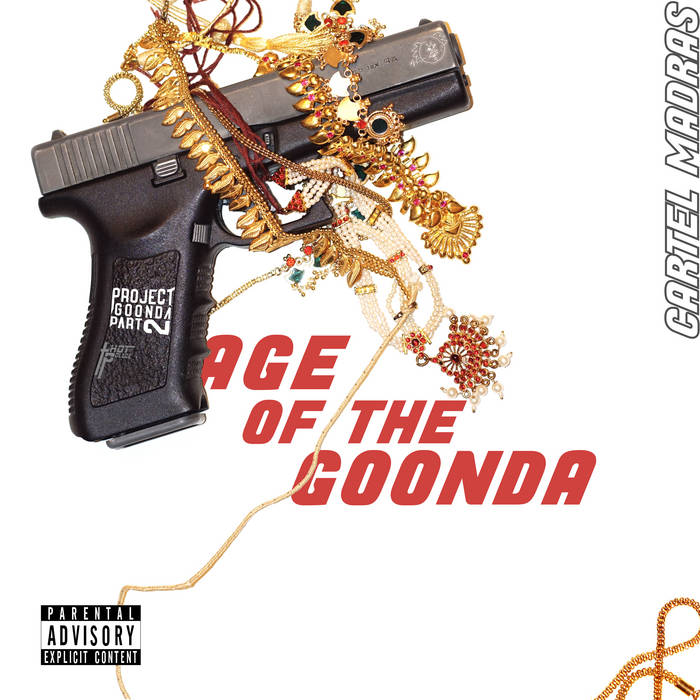 1. The powerful juxtaposition of a Western term aimed at ghettoizing other cultures and the English colonial name foisted on Chennai, India; 2. A queer, female, Desi act igniting a revolution because they’re sick of this bullshit

“We really want people who come to our shows to feel like they’ve been punched in the face,” says Contra, one-half of rap provocateurs Cartel Madras, of their FOMO-inducing live shows. “It’s like a riot just passed you, and you’re like, ‘What was that? What did I just experience?’” But also, “‘How do I do that again?’”

Cartel Madras also includes Contra’s sibling, Eboshi—both born in Chennai in the Indian state of Tamil Nadu and raised in Calgary, Canada. Like their upbringing, their music is a cultural syncretism, a heady mix of trap with punk, house, and South Indian aesthetics that they’ve anointed “goonda rap.” Their second EP is Age of the Goonda, (out November 1st, 2019 on Sub Pop Records), a sonically expansive successor to their first EP, Trapistan, which boasted the party-down hit “Pork & Leek. A manifesto for the times, Age of the Goonda is an in-your-face call to arms for—immigrants, women of color, the LGBTQ+ community, Desis (a.k.a. Westernized Indians)—those who must resist being treated as underdogs.

“Goonda Gold” is the EP’s central pulse, its anthem. “When you hear it, it feels big like you’re watching this crazy-ass gangsta movie,” says Contra. “And it does borrow from certain vintage South Indian filminess.” Rapid-fire in delivery—“Gold on my neck I’m a goonda / Got guns in the air like a junta”—and hastened along by shimmery beats from D.C. Desi upstart SkinnyLocal, it pointedly shows off the duo’s legit rapping skills.

The word “goonda” means “thug” and is used across India, Bangladesh, and Pakistan. Admittedly, India—saddled by tropes of yoga, spicy food, and Bollywood—isn’t generally associated with thug life. “But India has a lot of fear and a lot of energy,” Eboshi says. “That story isn’t told enough anywhere, except for in India.” Here, the duo rethink that angst as concepts of cultural and sexual empowerment. “That is the song to all my brown gurlz out there: blast this in your car and scare everyone around you,” she continues. “It comes in real hot. And we just don’t quit in that song.” That’s an understatement: They actually held a gun in the sound booth while recording the track—because someone in the studio just happened to have one. “Don’t ask me why,” says Eboshi, then jokes: “I’m assuming it was for cosplay.”

The track’s kindred spirit is “Dawood Ibrahim,” named for India’s Pablo Escobar, a gangster-terrorist from Mumbai currently on the lam in Pakistan. They took the idea of Dawood—bold, unbounded, reckless—and filter it through a queer female lens. Backed by Belgian trap producer DJ Yung Vamp, the song features spacious synths and asymmetrical cadences in the form of potent poetry such as, “I fuck with all of my Desi hunnis / Put my other goodies in my other gunny /I’m cooking up some dosa to some Motown / That’s the wave I’m on now.” Ibrahim never lived so well.

The EP came together over in a little under 7 months. They wrote the bulk of their material at their old Calgary apartment (a.k.a. Thot Police Studios) and at a women’s songwriting residency at Whidbey Island in Washington State. Marvels Eboshi: “We were there for 10 days. In the woods. We were like, ‘Holy shit! I didn’t even know I could unlock these levels.” By June 2019, they had recorded Age of the Goonda at Echo Base Studios in Calgary and had signed to Sub Pop.

They grew infamous for their club shows and house parties around Calgary, where they formed a hip-hop collective called Thot Police. “When we started out, we didn’t know how many shows we’d be playing. So right away we treated every show like we might not get another chance,” Eboshi says. “Every time we do house shows, it’s been a massive rager.” Adds Contra, “The cops came through once to try to shut us down. We blew out all the speakers.”

Your warning comes at the very start of Age of the Goonda in the form of “Jumpscare,” an ominous track produced by noise-minimalist Nevik. It captures that chaos that Cartel Madras are so adept at creating, and opens with possibly the most subversive pass-the-mic verse ever: “Take off your top boy / Somebody bring me my gun / Black bag in the back of the jeep / You just a bitch on the run.” Says Eboshi: “The audience taps into it right away. They start moshing and go crazy, and we have a full mental breakdown on stage when we perform it.” If there’s any mystic, Eastern mind-body connection to what Cartel Maras are doing, it’s this thrilling lightning-in-a-bottle way they deftly project activism and libertinism at once.

“There’s a certain thing that hip hop does, that gangster rap does: a narrative of being larger than life, kind of violent but in power,” says Eboshi. “We are paying tribute to that, but also focusing that on women who are queer and brown, telling stories that haven’t been told. We are speaking to, and about, narratives that are not magnified in popular culture, while paying tribute to the subgenres that have continuously influenced our sound. That’s what we want goonda rap to become.”

Bandcamp Daily  your guide to the world of Bandcamp